Thirty years on from the publication of Delirious New York, Rem Koolhaas’s manifesto celebrating congestion culture, at the peak of the high building craze in most of the world, and moving on from post 9-11 panic, Arquine announces its 10th International Competition, proposing the design of two skyscrapers, with 100 floors each, to celebrate the bicentenary of Mexico’s independence in 2010.

The skyscraper and the open chapel are two typologies of genuinely American origin. The challenge of imagining a new function for the skyscraper (beyond phallic-formal exhibitionism) invites us to enrich the controversy over the leap in urban scale as a means to the Mexican capital’s necessary densification.

The project consists in setting each tower in two strategic areas of Mexico City: the Azcapotzalco Technology Park and the Xochimilco Ecology Park, establishing a dialectic between content and void; between built object and urban landscape. The competition invites you to embark on the projects with two relevant discourses in mind: ecology and technology, true paradigms of early 21st-century culture.

The towers should favour mixed uses (permanent or temporary housing, offices, workshops, businesses, etc.) and blur the limits between the public and private domains. 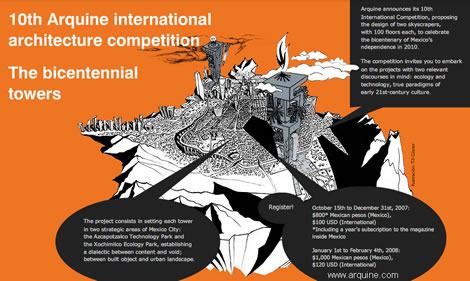