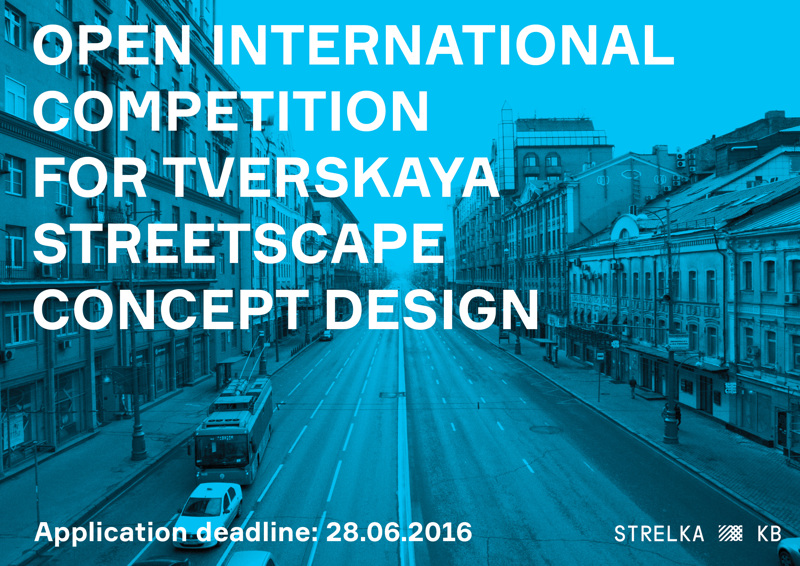 Strelka KB announces the launch of an open international competition for Tverskaya streetscape concept design. The design project covers Tverskaya Street (from Pushkinskaya Square to Triumfalnaya Square) and 1st Tverskaya-Yamskaya Street in Moscow. The competition is aimed to attract young and emerging architects for the projects on the renovation of urban territories as a part of "My Street" programme. The winner will be announced on the 7th of July 2016.

The purpose of the Competition is to select 3 (three) best Concept Designs. The Jury members through voting procedure will select the winner and the nalists (second and third places).

The Competition is open for Russian and international architects and landscape architects / designers. The Participants should be registered as legal entities or sole proprietors and have an appropriate legal capacity for running a business and participating in the Competition.

Giovanna Carnevali, competitions programme director at Strelka KB: «One of the key goals of the competition is to engage the new generation of architects into work on urban projects. As a result of our practice during the current and the previous year on the position of a strategic consultant for the Government of Moscow, we managed to develop the standards for the streetscape improvement and invite leading international architects to carry out projects for iconic streets of the city, henceforth setting the quality standard that we would like to establish as a benchmark for the streetscape improvement in Moscow».

Russian and international landscape designers and architects are invited to take part in the competition. Applications deadline is on 28th June 2016.

The jury chairman is Petr Biryukov, deputy mayor of Moscow at the Government of Moscow for Housing, Utilities and Amenities.

About "My Street" project

"My Street" is the largest cityscape improvement project, initiated by the Government of Moscow, aiming to advance the quality of urban environment. The programme implies complex improvement of Moscow streets and side streets, avenues and embankments.

The second stage of the competition opens in May 2016, during which more than 50 urban objects will be transformed. That is how the key streets of the city will be renovated, such as Tverskaya, Taganskaya, Bolshaya Yakimanka, Novy Arbat. New developments will also involve parts of The Boulevard Ring and The Garden Ring. More than 30 architectural firms from Russia, Germany, The Netherlands, China, Denmark, Sweden, USA and France were involved in the projects as a part of the programme.