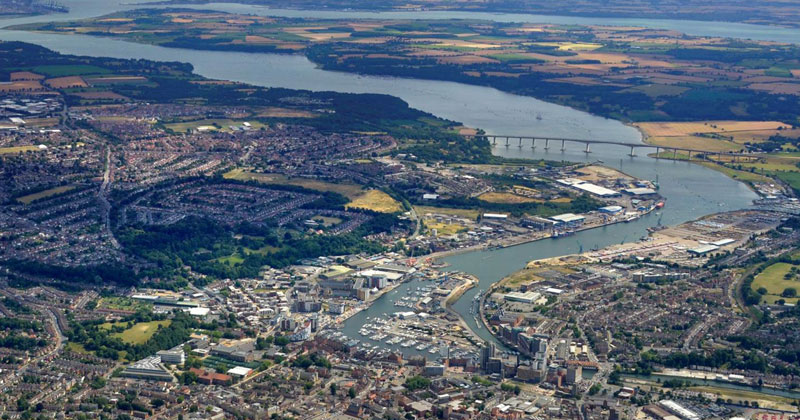 The Royal Institute of British Architects' (RIBA) Competitions unit is pleased to announce the launch of a design competition with associated tender process on behalf of Suffolk County Council for the Orwell Crossings Project in Ipswich.

Commitment to fund this £77 million project was announced in the Chancellor of the Exchequer's March 2016 Budget and will see the proposed construction of two new crossings near the town's waterfront area, together with the refurbishment of an existing swing bridge across the lock which provides access to the ‘Wet Dock' and its marina facilities.

This major infrastructure project will ease traffic congestion in Ipswich by providing a major new crossing of the River Orwell, connecting the waterfront area to the town centre and improving journey times for vehicles, cyclists and pedestrians. It will also deliver a range of economic benefits and act as a catalyst and focal point for further regeneration, contributing to the continued prosperity, redevelopment and expansion of the wider waterfront area. The development potential of the man-made peninsular Island which separates the Wet Dock from the New-Cut will also be released, joining the Island to the River Orwell's west bank.

The Council is seeking to appoint an Architectural team with experience of collaborating on major infrastructure projects, of working within a multi-disciplinary team environment, and the design of high quality bridge structures to programme and budget. The appointed Architectural team will join an existing project team led by WSP | Parsons Brinckerhoff (WSP|PB) who will be responsible for providing structural and civil engineering input to the project. It is envisaged that the project will also seek to utilise Early Contractor Involvement to aid development of the design concepts with respect to buildability etc.

Progression of the project will be subject to securing necessary consents and confirmation of funding commitment. It is intended that the project will be delivered under a Design & Build contract and that the design team will be novated to the contractor. It is currently anticipated that construction will need to commence on site by 2020 in order to meet funding conditions for the Upper Orwell Crossings project.

Candidates should note that design data for The Upper Orwell Crossings project will be managed and coordinated using BIM to Level 2.

The appointed Architectural team will therefore be expected to have appropriate capability to constructively input to the BIM model and collaborate with other design disciplines accordingly.

The scope of the design competition will require short-listed Architectural teams to develop design concepts for the crossings independently of the existing SCC and WSP | PB design team. In developing their concepts the Architectural team may therefore wish to consider engagement of other specialist bridge design consultant(s) within their team, and this might include a structural engineer, M&E consultant and/or landscape designer to advise on the concept proposals.

In order to be considered for the project, candidates must submit a duly completed Pre-Qualification Questionnaire.

The PQQ must be completed in its entirety, with an electronic version (PDF format) of the completed PQQ return submitted via the Suffolk Sourcing e-Tendering system at www.suffolksourcing.co.uk.

Responses to PQQs will be used to select a shortlist of candidates (minimum 5) to participate in the design concept phase of the competition.

Each short-listed Architectural team who submits a compliant tender for the competition phase and gives a clarification interview presentation will receive an honorarium payment of £10,000 (+VAT).